Is This The First Atlantic Tropical Wave For 2022?

Weather enthusiasts on social media were buzzing with excitement on Saturday, April 23rd, 2022, as the Barbados Meteorological Service (BMS) analyzed what they consider to be the first Atlantic tropical wave of the year. However, based on analysis by the National Hurricane Center (NHC) or the Trinidad and Tobago Meteorological Service (TTMS), wet weather is still forecast this upcoming week.

What you need to know:
– What happened: The Barbados Meteorological Service analyzed what they consider to be the first tropical wave for 2022 in the Atlantic.
– Why does this matter: The passage of the first tropical wave or the first modulation of the Intertropical Convergence Zone across T&T triggers the start of the local Wet Season.
– What does this mean for you: Rainy and cloudy weather is already in the forecast for T&T and the Windwards this week. This trough system is forecast to move across the region on Friday, with no major changes from the forecast weather expected from Monday through Thursday.

Who Decides What Is & Isn’t A Tropical Wave?

A tropical wave is a type of trough, i.e., an elongated area of relatively lower air pressure that is typically oriented north to south. Approximately 60 waves track across the Atlantic Ocean annually, and 30-40 directly impact Trinidad and Tobago. These systems, also called African easterly waves, are among the main rainfall-producing features for Trinidad and Tobago.

Tropical Waves can be significant rainfall producers in the tropics, with heavy convection (thunderstorms) usually on the east side of the wave axis and generally clear weather on the west side of the axis.

Generally, these waves are inverted troughs of low pressure, seen as an inverted v-pattern in satellite imagery. These tropical waves can have a few points of origin. However, the NHC designates these troughs of low pressure when there is a clear origin from convection in Northern Africa and the African Easterly Jet. Other local and regional organizations can sometimes apply these definitions to surface to low-level troughs generated in the East Atlantic near Western Africa or the Gulf of Guinea.

This could be the case with the BMS. Generally, we look towards the NHC’s Tropical Analysis and Forecast Branch’s Surface Pressure Analysis of the Atlantic for these features. In fact, in our annual tropical wave numbering, we use the NHC’s analysis as our baseline for counting. However, tropical waves are sometimes dropped and added from their analysis, which is done every six hours. 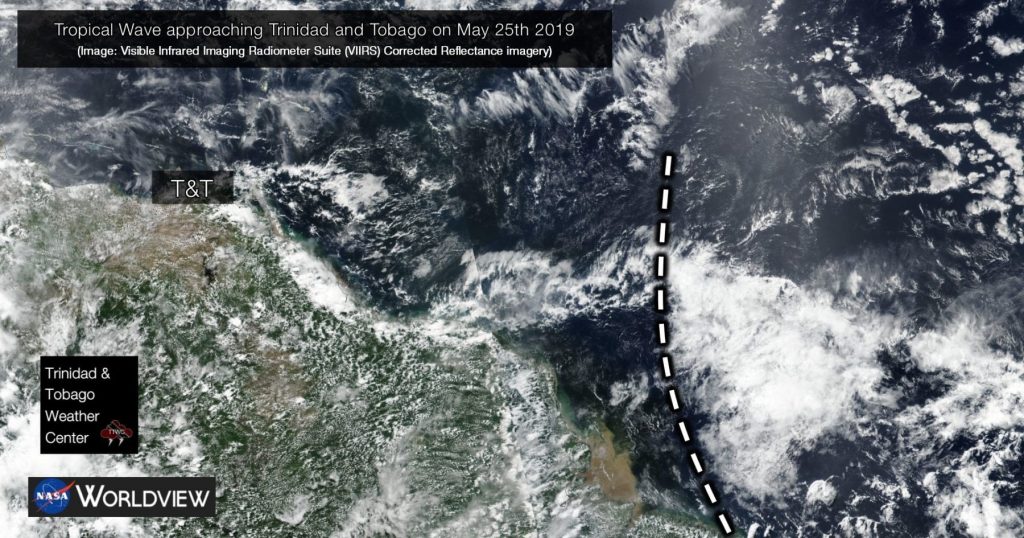 As the hurricane season nears, we begin to look farther east for the beginnings of tropical activity – as far east as Africa for features called tropical waves. Tropical waves, also…

The Case For This Tropical Wave

Several tools are used to track the genesis and progression of tropical waves. However, the main tool used is satellite imagery using specialized diagrams called Hovmöller Diagrams seen above.

We can clearly see an area of cloudiness, showers, and thunderstorms track westward from April 20th through April 21st before fizzling out as it entered the Atlantic Ocean.

Though invisible to the naked eye, the energy associated with these systems can be seen using specialized satellite imagery and wind data, particularly at the 700- and 850-millibar levels of the atmosphere.

There is some very weak spin at both the 700- and 850-millibar levels, but in that vicinity, the Intertropical Convergence Zone is also present, where there is a natural area of spin in the atmosphere.

In addition, tropical waves tend to have a significant volume of atmospheric moisture. This seems to be the case with the BMS-analyzed tropical wave.

What does this mean for T&T?

Trinidad, Tobago, and the Lesser Antilles are already on track to see a fairly active week of weather due to a trough system, following a mostly dry April 2022.

For Trinidad and Tobago, the Trinidad and Tobago Meteorological Service is the sole arbiter to determine whether a system is a tropical wave or something else and declare the beginning of the Wet Season. Given that longer-range models indicate drier conditions for T&T during the second week of May 2022, the TTMS may not be inclined to declare the Wet Season just yet.

Still, high levels of atmospheric moisture will be present across T&T from overnight Sunday into Monday and persist through the upcoming week. The associated moisture with this surge of moisture and trough system is set to arrive across the region by Friday afternoon through Friday night.

Weatherwise, T&T won’t see any significant change from the forecasted weather between Monday and Thursday as cloudiness persists with intervals of showers and the odd thunderstorm across both islands.

However, following the axis of this low-pressure area is a surge of winds and Saharan Dust, which will agitate seas and decrease visibility and air quality into the upcoming weekend.