434 Following
15K Followers
Air quality is forecast to improve over the next 48 hours but another surge of #SaharanDust is looming to our east,… https://t.co/bWUJLa6we0
about 1 hour ago
Winds are forecast to be light over the next several days, leading to mostly slight to smooth seas across Trinidad… https://t.co/cJnuR3ibCe
2 hours ago
Follow
Home Weather Forecast Seas Forecast Sea Forecast: King Tides To Begin This Weekend

If you’re near the coast this weekend, you may notice that the ocean is further away from the coastline than usual during a low tide. On the other hand, if you’re at the beach, you may realize that those beach chairs should be placed further inland because, at high tide, the water is unusually high.

From Saturday, July 10th, 2022, this year’s highest high tides and lowest low tides are set to begin, ahead of the July 13th Supermoon. These tides are called King Tides, which usually indicate some of the highest tidal variations for a calendar year.

While these tides will affect nearshore areas, seas are forecast to remain moderate and occasionally choppy in open waters.

In addition, moderate to high concentrations of Saharan Dust are forecast to reduce horizontal visibility offshore, particularly from next week.

In sheltered areas, waves are forecast to be near or below 1.0 meters with occasionally choppy conditions due to forecast heavy showers or thunderstorm activity on Tuesday and on Friday, as well as due to increased low-level winds from late Thursday.

Additionally, King Tides are set to begin on Saturday, July 10th, 2022, and continue through the upcoming week (through July 16th). These tidal fluctuations will increase the potential for rip currents along T&T’s coastlines. With no lifeguards at some of our nation’s most popular beaches “until further notice,” extreme caution will be required by beachgoers.

Winds are forecast to be moderate to fresh through the next several days, with sustained winds between 10 to 20 knots from the southeast to the northeast but gusts as high as 30 knots are possible, mainly on Thursday night into Friday.

Generally, seas in open waters will remain moderate through the next seven days. In open waters, waves are forecast to generally be up to 2.0 meters through this week. By late Thursday through early Saturday, open water waves may exceed 2.0 meters.

If you’re near the coast this weekend into next week, you may notice that the ocean is further…
byKalain Hosein 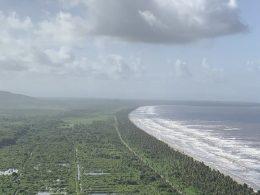 If you’re near the coast this weekend into next week, you may notice that the ocean is further…
byKalain Hosein
Total
183
Share
Loading Comments...