434 Following
15K Followers
Air quality is forecast to improve over the next 48 hours but another surge of #SaharanDust is looming to our east,… https://t.co/bWUJLa6we0
2 hours ago
Winds are forecast to be light over the next several days, leading to mostly slight to smooth seas across Trinidad… https://t.co/cJnuR3ibCe
3 hours ago
Follow
Home Weather Forecast Saharan Dust Fluctuating Saharan Dust Concentrations Forecast Over Next 10 Days

Varying levels of Saharan Dust continue to affect Trinidad and Tobago. Over the next several days, even with multiple tropical waves moving across the region, the dust is here to say – at least for the next ten days.

— Saharan Dust Surges: Dust levels are set to fluctuate across Trinidad and Tobago over the next ten days. Mild to moderate surges of dust are forecast to arrive on Wednesday, July 6th, with improvement by Friday, July 8th though mild dust levels are forecast to remain present through the weekend. Two significant dust surges are forecast to arrive by July 11th and July 15th.
— Impacts: Air quality levels across Trinidad and Tobago will vary between good and moderate through the forecast period, dipping to unhealthy levels for sensitive groups next week.
— What Should You Do: Sensitive groups will have brief periods during the upcoming forecast period where good air quality is anticipated. However, they should take the necessary precautions during dust surges. The general population will remain unaffected.

A moderate dust surge arrived across Trinidad and Tobago on Saturday, July 2nd, 2022. Air quality levels have fluctuated between good to moderate, with the visibility near ten kilometers outside of shower or thunderstorm activity over the last several days. Through this week, similar conditions are forecast, even with the passage and lingering instability from Tropical Wave 15 today, Tuesday, July 5th, 2022.

A reinforcing dust surge is set to arrive tomorrow, Wednesday, July 6th, 2022 but no significant change in air quality or visibility is forecast. Higher dust levels are forecast to remain north of T&T.

On Friday, July 8th, 2022, Saharan Dust will still be present, particularly across northern Trinidad and Tobago, but higher dust levels are forecast to remain north of the country. Through the weekend, Tropical Wave 16 is forecast to traverse the region, gradually diminishing dust levels until the start of the upcoming week.

Following Tropical Wave 16 over the upcoming weekend, a significant surge of Saharan Dust is forecast to begin moving across the Lesser Antilles, with higher concentrations affecting countries north of Trinidad and Tobago. Peak dust concentrations are forecast between Tuesday, July 12th, and Wednesday, July 13th, with gradually diminishing dust levels.

While this tropical wave is yet to be analyzed or even move off the African Coast, forecast models indicate another tropical wave moving across the Lesser Antilles between Wednesday, July 13th and Thursday, July 14th. The wave’s passage will reduce – but not remove – Saharan Dust from our area.

Instead, another significant surge of dust is set to follow on Friday, July 15th, 2022, and linger through the middle of July. 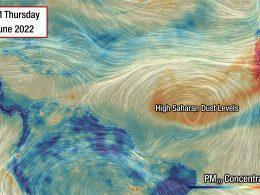 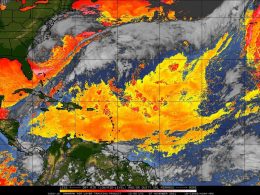 Over the next four, the usual haze typically attributed to Saharan Dust will be mixed with volcanic gases…
byKalain Hosein 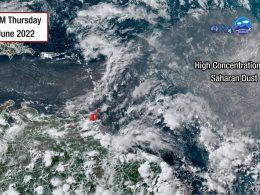 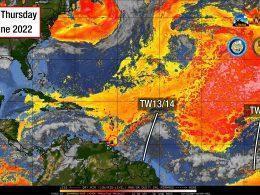