434 Following
15K Followers
Air quality is forecast to improve over the next 48 hours but another surge of #SaharanDust is looming to our east,… https://t.co/bWUJLa6we0
2 hours ago
Winds are forecast to be light over the next several days, leading to mostly slight to smooth seas across Trinidad… https://t.co/cJnuR3ibCe
3 hours ago
Follow
Home News Severe Weather Adverse Weather Alert Discontinued For T&T As Thunderstorms Subside

The Trinidad and Tobago Meteorological Service has discontinued the Adverse Weather Alert for the country as strong thunderstorms/heavy showers subside and Tropical Wave 13/14 moves across the Lesser Antilles. However, additional showers and thunderstorms remain possible over the weekend – though activity is forecast to be less impactful.

— Rainfall: Showers and thunderstorms remain in the forecast through Monday, trailing moisture from TW13/14 and the Intertropical Convergence Zone remains near the country. Higher rainfall chances will exist across Trinidad. Through Monday morning, rainfall totals between 15 to 25 millimeters are forecast across the country, with isolated rainfall totals up to 50 millimeters. These higher rainfall totals are forecast to favor eastern and southern areas.
— Hazards: Street/flash flooding is likely in heavier showers or thunderstorms. Chances for riverine flooding remain low across most river basins. Gusty winds may accompany lingering heavy showers or thunderstorms. Lightning will accompany thunderstorms.
— Alerts/Watches/Warnings: The Adverse Weather Alert has been discontinued by the Trinidad and Tobago Meteorological Service. There are no tropical cyclone watches or warnings in effect for T&T at this time.

The Trinidad and Tobago Meteorological Service has discontinued the Adverse Weather Alert (Yellow Level) on Friday afternoon at 4:35 PM.

“Settled conditions have returned after the passage of a tropical wave today. The likelihood of impactful thunderstorm activity has decreased although an isolated thunderstorm can still occur.” according to the Trinidad and Tobago Meteorological Service.

At this level, according to the TTMS, there is a low risk to public safety, livelihoods, and property.

The Met Office is advising the public to monitor weather conditions and official updates. 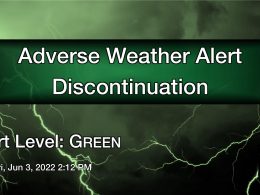 Tropical Wave 04 brought periods of showers and thunderstorms to Trinidad and Tobago over the last 36 hours,…
byKalain Hosein 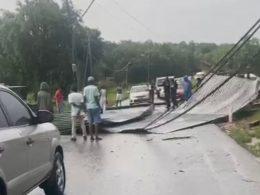 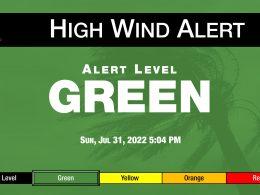