Following the passage of Tropical Wave 02 on Sunday, showers and thunderstorms affected T&T early on Monday. While the next tropical wave isn’t forecast to affect the country until the upcoming weekend, unsettled weather is forecast into Tuesday afternoon.

However, rainfall is expected to be short-lived as a dry and dusty atmosphere returns to T&T overnight Tuesday into Wednesday.

— Saharan Dust: Mild to moderate dust lingers mainly across Tobago, with a new surge of Saharan Dust forecast to arrive across the country Tuesday night into Wednesday morning. Air quality is forecast to be reduced through Friday.
— Rainfall: Mainly through Tuesday afternoon, isolated to scattered showers with isolated thunderstorms are possible across both islands. Overall heavier rainfall is forecast to favor eastern and southern Trinidad and Tobago. For the remainder of the week, only very brisk showers are possible, generally favoring eastern areas of the country.
— Hazards: Street/flash flooding is possible through Tuesday afternoon with wind gusts up to and in excess of 45 KM/H accompanying heavy showers or thunderstorms. Lightning will accompany thunderstorms.
— Alerts/Watches/Warnings: There are no alerts, watches, or warnings in effect for the country from the Trinidad and Tobago Meteorological Service at this time.

Monday night into Tuesday: Partly cloudy to occasionally overcast periods, interrupted by light to moderate showers mainly beginning after midnight. Brief, isolated heavy showers or thunderstorms are possible, generally favoring eastern areas of the country initially, then across the remainder of Trinidad and Tobago, mainly during the first half of Tuesday through the early afternoon. Conditions are forecast to become increasingly settled and hazy through Tuesday afternoon. Gusty winds are likely, and street/flash flooding is possible.

Marine: Seas are forecast to be moderate, with waves generally up to 1.5 meters, during the forecast period in open waters. In sheltered areas, waves are forecast to be below 1 meter but occasionally choppy during heavy showers or thunderstorms on Monday night into Tuesday.

Through the forecast period, the minimum low in Trinidad and Tobago is forecast to be between 24.0°C and 26.0°C, trending warmer across Tobago.

Maximum highs across the country are forecast to be generally up to 32.0°C in Trinidad and Tobago. In urbanized areas like Port of Spain, Scarborough, San Fernando, and Chaguanas, the maximum high temperatures could exceed 34.0°C.

On Tuesday, temperatures are forecast to be cooler overall, with minimum lows near 23.0°C and maximum highs near 30.0°C due to increased cloud cover and forecast rainfall.

There are several hazards across Trinidad and Tobago over the next five days.

This week’s main hazards would be localized street/flash flooding through Tuesday, while Saharan Dust is set to reduce air quality through the remainder of the week.

Riverine flooding is very unlikely based on current model guidance for accumulated rainfall over the next five days.

With the potential for thunderstorms, cloud-to-ground lighting can pose hazards for both on land and mariners. Landslides are also possible, particularly if heavy rainfall falls across elevated areas like the Northern Range and southwestern areas of Trinidad.

Through the forecast period, wind shear is forecast to remain unfavorable for persisting heavy rainfall. However, under favorable upper-level atmospheric conditions on Monday night/Tuesday morning, deeper pockets of convection may develop, producing heavy/violent rainfall rates in showers and thunderstorms.

Putting the rainfall forecast into context, rainfall rates in excess of 50 millimeters per hour or areas that receive in excess of 25 millimeters within an hour tend to trigger street flooding across the country or flash flooding in northern Trinidad. For riverine flooding to occur, a large area of the country (not just in highly localized areas of western coastal Trinidad) would have to record upwards of 75 millimeters within 24 hours, and rainfall would have to fall across major rivers’ catchment areas.

With wind gusts up to and in excess of 45 KM/H, whole trees are expected to be in motion, and there may be some inconvenience when walking against the wind gusts. Light outdoor objects may topple or become airborne such as garbage cans, potted plants, loose galvanize or construction material, and other outdoor furniture. Tents may jump. Older/weaker trees may fall, bringing down utility poles and lines.

Why I May Not/Will Not See Rainfall?

Isolated to scattered rainfall is forecast on Monday night into Tuesday, with highly isolated rainfall throughout the week.

The second tropical wave for the 2022 Atlantic Hurricane Season moved across Trinidad and Tobago Sunday morning through the afternoon. As with most tropical waves, the activity follows the wave axis, which became evident on Monday morning. Due to unfavorable wind shear and high concentrations of Saharan Dust, convection struggled to persist. However, the atmosphere has become sufficiently moist and unstable mainly across Trinidad on Monday.

What is a surface trough?

An elongated area with relatively low-pressure values when reduced to sea level. Areas with lower pressure generally coincide with unsettled weather. These features are typical across and near T&T.

Generally, over the next 12-18 hours, under somewhat favorable upper-level conditions, isolated to scattered showers are forecast to develop, with highly isolated and brief thunderstorms and heavy shower activity. Rainfall is set to mostly subside by Tuesday afternoon, with a surge of Saharan Dust drying out the low to mid-levels of the atmosphere as the Atlantic high-pressure system becomes dominant by Tuesday night into Wednesday.

Strong westerly to southwesterly wind shear will continue to keep overall heavier rainfall east and north of Trinidad and Tobago through the five-day forecast period, inclusive of the next 24 hours.

Saharan Dust is forecast to remain across the Windwards through the week with fluctuating mild to moderate concentrations, limiting further rainfall and leading to mostly hazy and sunny conditions from Wednesday onward. Low-level cloud patches could bring brief cloudy periods with brisk (lasting no more than 5 minutes) showers. 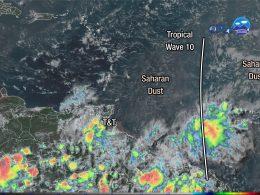 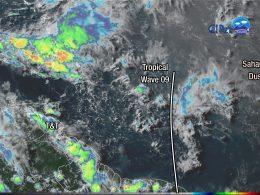 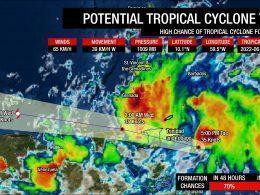 Though it is still not yet a fully formed tropical cyclone, Potential Tropical Cyclone Two is forecast to…
byKalain Hosein
977 shares
977
0
0
0
0
0
0
0 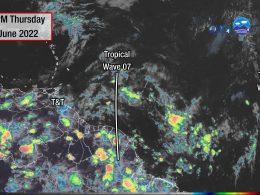