434 Following
15K Followers
Air quality is forecast to improve over the next 48 hours but another surge of #SaharanDust is looming to our east,… https://t.co/bWUJLa6we0
3 hours ago
Winds are forecast to be light over the next several days, leading to mostly slight to smooth seas across Trinidad… https://t.co/cJnuR3ibCe
4 hours ago
Follow
Home News Severe Weather Localized Flood Alert Issued For Trinidad

Periods of rain, moderate to heavy showers, and thunderstorms have affected Trinidad and Tobago over the last two days. This activity has mainly been associated with an active Intertropical Convergence Zone (ITCZ). With the ITCZ remaining present, Tropical Wave 25 on the approach, and river levels elevated, the Met Office has issued a Localized Flood Alert. This is the third time such an alert has been issued – the first was November 2nd, 2020, and July 2nd, 2021.

— Rainfall: Through the next 24-48 hours, additional rain, moderate to heavy showers, and isolated thunderstorms are forecast, interrupting variably cloudy skies across both islands. Peak intense activity, including isolated heavy to violent showers and intense thunderstorms, is forecast from the early morning through the afternoon, gradually settling by the evening. Additional showers and thunderstorms are forecast to develop during Saturday morning across Trinidad. Overall rainfall totals between 25 and 75 millimeters are forecast across both islands, trending higher across eastern and southern areas of Trinidad and Tobago, as well as along western coastal Trinidad. Isolated totals may accumulate up to 150 millimeters, particularly across the eastern half of Trinidad.
— Hazards: Chances for street/flash flooding are high to very high through Saturday. Chances for riverine flooding are medium to high, but severe flooding, similar to the October 2018 Greenvale Floods, is not expected. Gusty winds in excess of 45 KM/H accompanying heavy showers or thunderstorms are likely. Lightning will accompany thunderstorms. Landslides are possible across northeastern areas of Trinidad and Tobago.
— Alerts/Watches/Warnings: A Localized Flood Alert (Yellow Level) goes into effect at 8:00 PM Thursday, August 4th, 2022, and remains in effect through 8:00 PM Friday, August 5th, 2022 for Trinidad, from the Trinidad and Tobago Meteorological Service. There are no tropical storm or hurricane watches or warnings in effect for T&T at this time.

The Trinidad and Tobago Meteorological Service has issued a Localized Flood Alert (Yellow Level) on Thursday at 5:12 PM. The alert goes into effect at 8:00 PM Thursday, August 4th, 2022, and remains in effect through 8:00 PM Friday, August 5th, 2022.

“Due to the rainfall accumulation over the past 2 days, smaller watercourses are becoming overwhelmed. With extended periods of rainfall forecasted for tonight and tomorrow and 60% chance of heavy showers and/or thunderstorms expected, localized ponding can occur and flooding in some areas due to filled drains and smaller water courses. This can be exacerbated at high tides which will be at approximately 8 p.m. (4th August), 9 a.m., and 9 p.m. (5th August). Note that major rivers are being monitored and continue to be contained at this time though they are near threshold levels (particularly the Caroni River).” according to the Trinidad and Tobago Meteorological Service. This “alert” status takes into account the possibility of the event occurring. This localized flood event is likely.

The color of the alert indicates the severity of the event and the probability of the event occurring. Currently, the alert level is Yellow. This means that the hazards are likely, but the severity of impacts is moderate for this particular alert. You should be aware of the hazards in your area associated with street, flash, and possible minor to moderate riverine flooding.

For a moderate Localized Flood Alert, there is the potential for possible injuries, where behavioral changes are required to ensure safety. There may be minor damage to property, with income-earning temporarily disrupted and a couple of communities affected.

The Met Office is advising the public to carefully monitor weather conditions and river/water levels. Monitor updates from official sources and plan safety measures, and do not take unnecessary risks. Avoid driving or wading through flood waters. Follow the instructions of government officials. 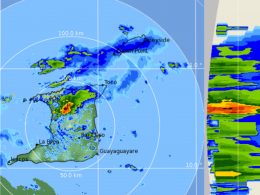 On the afternoon of the 4th March 2018, a severe thunderstorm dumped torrential rainfall across Trinidad’s northern half,…
byKalain Hosein 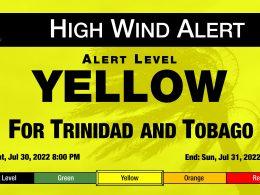 A low-level jet has developed across the Southern Windwards, producing strong winds at low levels of the atmosphere.…
byKalain Hosein
641 shares
641
0
0
0
0
0
0
0 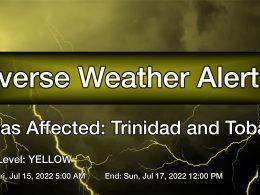 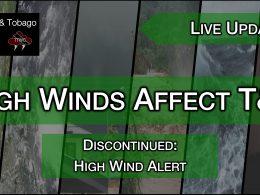 Through Sunday, across both islands, a weakening tropical wave, the Intertropical Convergence Zone, and this low-level jet are…
byKalain Hosein
20 shares
20
0
0
0
0
0
0
0
Total
577
Share
Loading Comments...